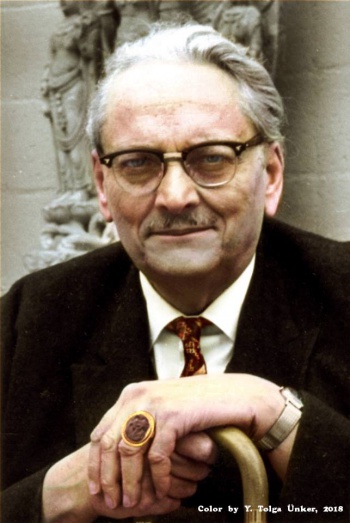 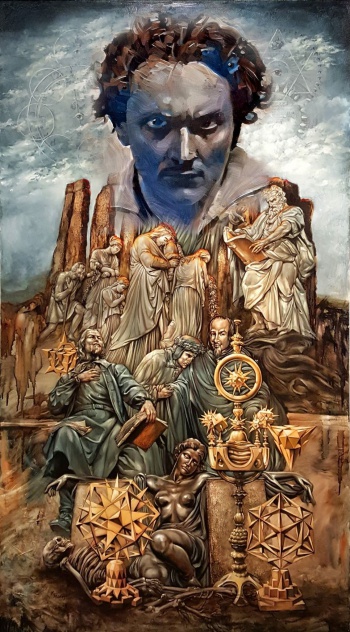 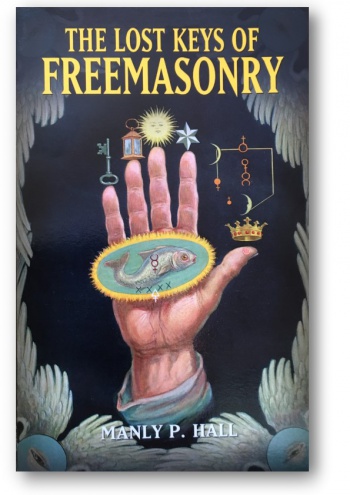 Manly P. Hall was born 1901 in Peterborough in Ontario Canada and in 1923 Hall moved to Los Angeles, California. In that year he published his first of over 150 works "The Lost Keys Of Freemasonry". Later in 1928, at the age of 27 years, he published "The Secret Teachings of All Ages: An Encyclopedic Outline of Masonic, Hermetic, Qabbalistic and Rosicrucian Symbolical Philosophy".

In 1934, Hall founded the Philosophical Research Society (PRS) in Los Angeles, California, an organization dedicated to the study of religion, mythology, metaphysics, and the occult.

It is claimed that Hall was made a knight patron of the Masonic Research Group of San Francisco in 1953, although he was not raised as a Mason until 22 November 1954 into Jewel Lodge No. 374 , San Francisco. He later received his 32° in the Valley of San Francisco AASR. On December 8, 1973 (47 years after writing "The Secret Teachings of All Ages"), Hall was recognized as a 33° Mason (the highest honor conferred by the Supreme Council of the Scottish Rite) at a ceremony held at the Philosophical Research Society (PRS). The definitive Manly Palmer Hall Archive states that Hall received the 33°, “despite never being initiated into the physical craft".

The Lecturer and Author

In his over 70-year career, Hall delivered approximately 8,000 lectures in the United States and abroad, authored over 150 books and essays, and wrote countless magazine articles.

(March 18, 1901 – August 29, 1990) was a Canadian-born author, lecturer, astrologer and mystic. He is best known for his 1928 work The Secret Teachings of All Ages. Over his 70 year career, he gave thousands of lectures, including two at Carnegie Hall, and published over 150 volumes. In 1934, he founded The Philosophical Research Society in Los Angeles, which he dedicated to the "Truth Seekers of All Time", with a research library, lecture hall and publishing house. Many of his lectures can be found online and his books are still in print.

Manly P. Hall was born in 1901 in Peterborough, Ontario, Canada, to William S. Hall, a dentist, and Louise Palmer Hall, a chiropractor and member of the Rosicrucian Fellowship. In 1919 Hall, who never knew his father, moved from Canada to Los Angeles, California, with his maternal grandmother to reunite with his birth mother, who was living in Santa Monica, and was almost immediately drawn to the arcane world of mysticism, esoteric philosophies, and their underlying principles. Hall delved deeply into "teachings of lost and hidden traditions, the golden verses of Hindu gods, Greek philosophers and Christian mystics, and the spiritual treasures waiting to be found within one's own soul." Less than a year later, Hall booked his first lecture, and the topic was reincarnation.:15–18

A tall, imposing, confident and charismatic speaker who soon took over as preacher of the Church of the People in 1919, at Trinity Auditorium in downtown Los Angeles, he read voraciously on "comparative religion, philosophy, sociology and psychology," and "seemingly overnight . . . became a one-stop source of an astonishing range of eclectic spiritual material that resonates with the intellect, and the subconscious.":21 Hall was ordained a minister in the Church of the People on May 17, 1923, and "a few days later, he was elected permanent pastor of the church.":28

His first publications consisted of two small pamphlets, "The Breastplate of the High Priest" (1920), and "Wands and Serpents." Between 1921 and 1923 he wrote three books, The Initiates of the Flame published in October 1922, The Ways of the Lonely Ones published in 1922, and The Lost Keys of Freemasonry published in March 1923.

During the early 1920s, Carolyn Lloyd and her daughter Estelle—members of a family that controlled a valuable oil field in Ventura County, California—began "sending a sizeable portion of their oil income to Hall," who used the money to travel and acquire a substantial personal library of ancient literature.[4]:38–43 Hall's "first trip around the world to study the lives, customs and religions of countries in Asia and Europe," which commenced December 5, 1923, was paid for by donations from Carolyn Lloyd and her congregation.

Later in 1928, at the age of 27 years, he published An Encyclopedic Outline of Masonic, Hermetic, Qabbalistic and Rosicrucian Symbolical Philosophy: Being an Interpretation of the Secret Teachings concealed within the Rituals, Allegories and Mysteries of all Ages, which is more commonly referred to as The Secret Teachings of All Ages:vi The major books which followed include The Dionysian Artificers (1936), Freemasonry of the Ancient Egyptians (1937), and Masonic Orders of Fraternity (1950).

The Secret Teachings of All Ages

Hall became sufficiently known and respected as a lecturer and interpreter of the writings of the ancients, and the most useful and practical elements of classical idealism, that he successfully appealed, through advertisements and word of mouth, for funds to finance the book that became The Secret Teachings of All Ages - An Encyclopedia Outline of Masonic, Hermetic, Qabbalistic and Rosicrucian Symbolic Philosophy, whose original cost of publication in 1928 was estimated to be $150,000,:20–21, 50 although the price of individual copies varied. According to original subscription agreements on file at the Philosophical Research Society, editions were sold by subscription for $75 on a pre-publication basis, but "the price of this edition after delivery by the printer is understood to be One Hundred Dollars." Under the subscription terms, $15 was due at signing of the agreement, and "the balance of Sixty Dollars in four equal monthly payments each." The H.S. Crocker Company of San Francisco agreed to publish the book "if Hall could secure the interest of book designer John Henry Nash, who once worked as a printer to the Vatican."

After The Secret Teachings of All Ages was published, Hall "went from being just another earnest young preacher in the City of Angels to becoming an icon of the increasingly influential metaphysical movement sweeping the country in the 1920s. His book challenged assumptions about society's spiritual roots and made people look at them in new ways." Hall dedicated The Secret Teachings of All Ages to "the proposition that concealed within the emblematic figures, allegories and rituals of the ancients is a secret doctrine concerning the inner mysteries of life, which doctrine has been preserved in toto among a small band of initiated minds." As one writer put it: "The result was a gorgeous, dreamlike book of mysterious symbols, concise essays and colorful renderings of mythical beasts rising out of the sea, and angelic beings with lions' heads presiding over somber initiation rites in torch-lit temples of ancestral civilizations that had mastered latent powers beyond the reach of modern man." In 1988, Hall himself wrote: "The greatest knowledge of all time should be available to the twentieth century not only in the one shilling editions of the Bohn Library in small type and shabby binding, but in a book that would be a monument, not merely a coffin. John Henry Nash agreed with me."

Hall and his followers went to extreme lengths to keep any gossip or information that could tarnish his image from being publicized, and little is known about his first marriage, on April 28, 1930, to Fay B. deRavenne, then 28, who had been his secretary during the preceding five years. The marriage was not a happy one; his friends never discussed it, and Hall removed virtually all information about her from his papers following her suicide on February 22, 1941.Following a long friendship, on December 5, 1950, Hall married Marie Schweikert Bauer (following her divorce from George Bauer), and the marriage though stormy was happier than his first.Marie Schweikert Bauer Hall died April 21, 2005. She was born on June 24, 1904.

During the early 1930s, using money from the Lloyds, "Hall traveled to France and England, where he acquired his most extensive collection of rare books and manuscripts in alchemy and esoteric fields from London auctioneer, Sotheby & Company." Through an agent, due to the depressed economic conditions of the era, Hall was able to buy a substantial number of rare books and manuscripts at reasonable prices. When Caroline Lloyd died in 1946, she bequeathed Hall a home, $15,000 in cash, and "a roughly $10,000 portion of her estate's annual income from shares in the world's largest oil companies for 38 years."

In 1934, Hall founded the Philosophical Research Society (PRS) in Los Angeles, California, a nonprofit organization[ dedicated to the study of religion, mythology, metaphysics, and the occult.

He was a Knight Patron of the Masonic Research Group of San Francisco, with which he was associated for a number of years prior to his Masonic affiliations. On June 28, 1954, Hall initiated as a Freemason into Jewel Lodge No. 374, San Francisco (now the United Lodge); passed September 20, 1954; and raised November 22, 1954. He took the Scottish Rite Degrees a year later. He later received his 32° in the Valley of San Francisco AASR (SJ). On December 8, 1973 (47 years after writing The Secret Teachings of All Ages), Hall was recognized as a 33° Mason (the highest honor conferred by the Supreme Council of the Scottish Rite) at a ceremony held at the Philosophical Research Society (PRS)).

In his over 70-year career, Hall delivered approximately 8,000 lectures in the United States and abroad, authored over 150 books and essays, and wrote countless magazine articles. He appears in the introduction to the 1938 film When Were You Born, a murder mystery that uses astrology as a key plot point. Hall wrote the original story for the film (screenplay by Anthony Coldeway) and is also credited as the narrator.

In 1942, Manly Hall spoke to an attendance-setting audience at Carnegie Hall, on "The Secret Destiny of America," which later became a book of the same title. He returned in 1945 for another well-attended lecture at the famous venue, titled: "Plato's Prophecy of Worldwide Democracy."

The PRS still maintains a research library of over 50,000 volumes, and also sells and publishes metaphysical and spiritual books, mostly those authored by Hall.

After his death, some of Manly Hall's rare alchemy books were sold to keep the PRS in operation. "Acquisition of the Manly Palmer Hall Collection in 1995 provided the Getty Research Institute with one of the world's leading collections of alchemy, esoterica, and hermetica."

It was reported in 2010 that President Ronald Reagan adopted some ideas and phrasing from Hall’s book The Secret Destiny of America (1944), using them in speeches and essays 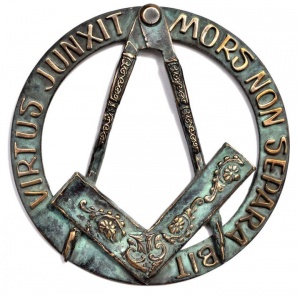 This example comes from the forteenth degree of Scottish rite Freemasonry. The motto for this degree is, ‘Virtus Junxit Mors Non Seperabit’ – ‘What Virtue Has Joined Together Death Shall Not Separate’. It has a gematria value of 3160. This equates it firstly with the description of St John found in John’s Gospel, ‘That disciple whom Jesus loved’ . We also find at 3161 the Greek words, Το κοας χρυσου – ‘The golden fleece’. This fits in with the ancient (Templar) identification of John as the ‘Lamb of God’. These connections suggest that this degreeMasonry unites the Mason to the master builder Christ with the same love that Christ bore to to his beloved disciple John.

We also find at this value an alchemical allusion for here is the conjunction of ‘MIM’ – water, and ‘ASh’ – fire, when both words are ennumerated in plenitude (1320 + 1841).

It is arguable that the spelling of ‘seperabit’ is more correctly ‘separabit’. If taken as such the gematria value of the motto falls to 3156 and the meaning assigned to it above is lost. Manley Palmer Hall used the former spelling in his esoteric compendium The Secret Teaching of all Ages.