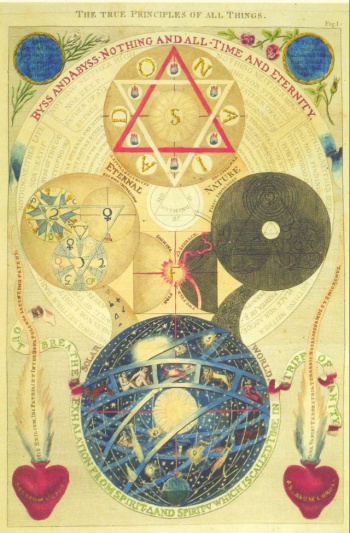 Back in December we brought you some exciting news. Thanks to a generous donation from Da Vinci Code author Dan Brown, Amsterdam’s Ritman Library—a sizable collection of pre-1900 books on alchemy, astrology, magic, and other occult subjects—has been digitizing thousands of its rare texts under a digital education project cheekily called “Hermetically Open.” We are now pleased to report, less than two months later, that the first 1,617 books from the Ritman project have come available in their online reading room. The site is still in beta, so to speak; in their Facebook announcement, the Ritman admits they are “still improving the whole presentation,” which is a bit clunky at the moment. But for fans and students of this literature, a little inconvenience is a small price to pay for full access to hundreds of rare occult texts.

If there’s one thing The Da Vinci Code’s Dan Brown and “The Library of Babel”’s Jorge Luis Borges have in common it is a love for obscure religious and occult books and artifacts. But why do I compare Borges—one of the most highly-regarded, but difficult, of Latin American poets and writers—to a famous American writer of entertaining paperback thrillers? One reason only: despite the vast differences in their styles and registers, Borges would be deeply moved by Brown’s recent act of philanthropy, a donation of €300,000 to Amsterdam’s Ritman Library, also known as the Bibliotheca Philosophica Hermetica House of Living Books.

The generous gift will enable the Ritman to digitize thousands of “pre-1900 texts on alchemy, astrology, magic, and theosophy,” reports Thu-Huong Ha at Quartz, including the Corpus Hermeticum (1472), “the source work on Hermetic wisdom”; Giordano Bruno’s Spaccio de la bestia trionfante (1584); and “the first printed version of the tree of life (1516): A graphic representation of the sefirot, the 10 virtues of God according to the Kabbalah.”

Brown, the Ritman notes, “is a great admirer of the library and visited on several occasions while writing his novels The Lost Symbol and Inferno.” Now he's giving back. Some of the revenue generated by his bestselling novels, along with a €15,000 contribution from the Dutch Prins Bernhard Cultuurfonds, will allow the library’s core collection, “some 3,500 ancient books,” to come online soon in an archive called “Hermetically Open.”

For now, the curious can download the 44-page guide to the collection as a free ebook, and watch the animated video at the top, a breezy explainer of how the books will be transported, digitized, and uploaded. Just above, see a trailer for a documentary about the Ritman, founded by businessman Joost R. Ritman in 1984. The library holds over 20,000 volumes on mysticism, spirituality, religion, alchemy, Gnosticism, and more.

Visitors should be aware that these books are written in several different European languages. Latin, the scholarly language of Europe throughout the Medieval and Early Modern periods, predominates, and it’s a peculiar Latin at that, laden with jargon and alchemical terminology. Other books appear in German, Dutch, and French. Readers of some or all of these languages will of course have an easier time than monolingual English speakers, but there is still much to offer those visitors as well.

In addition to the pleasure of paging through an old rare book, even virtually, English speakers can quickly find a collection of readable books by clicking on the “Place of Publication” search filter and selecting Cambridge or London, from which come such notable works as The Man-Mouse Takin in a Trap, and tortur’d to death for gnawing the Margins of Eugenius Philalethes, by Thomas Vaughn, published in 1650.

The language is archaic—full of quirky spellings and uses of the “long s”—and the content is bizarre. Those familiar with this type of writing, whether through historical study or the work of more recent interpreters like Aleister Crowley or Madame Blavatsky, will recognize the many formulas: The tracing of magical correspondences between flora, fauna, and astronomical phenomena; the careful parsing of names; astrology and lengthy linguistic etymologies; numerological discourses and philosophical poetry; early psychology and personality typing; cryptic, coded mythology and medical procedures. Although we’ve grown accustomed through popular media to thinking of magical books as cookbooks, full of recipes and incantations, the reality is far different.

Encountering the vast and strange treasures in the online library, one thinks of the type of the magician represented in Goethe’s Faust, holed up in his study,

Where even the welcome daylight strains
But duskily through the painted panes.
Hemmed in by many a toppling heap
Of books worm-eaten, gray with dust,
Which to the vaulted ceiling creep

The library doesn’t only contain occult books. Like the weary scholar Faust, alchemists of old “studied now Philosophy / And Jurisprudence, Medicine,— / And even, alas! Theology.” Click on Cambridge as the place of publication and you’ll find the work above by Henry More, “one of the celebrated ‘Cambridge Platonists,’” the Linda Hall Library notes, “who flourished in mid-17th-century and did their best to reconcile Plato with Christianity and the mechanical philosophy that was beginning to make inroads into British natural philosophy.” Those who study European intellectual history know well that More’s presence in this collection is no anomaly. For a few hundred years, it was difficult, if not impossible, to separate the pursuits of theology, philosophy, medicine, and science (or “natural philosophy”) from those of alchemy and astrology. (Isaac Newton is a famous example of a mathematician/scientist/alchemist/believer in strange apocalyptic predictions.)

Given the Ritman’s alacrity and eagerness to publish this first batch of texts, even as it works to smooth out its interface, we’ll likely see many hundreds more books become available in the next month or so. For updates, follow the Ritman Library and The Embassy of the Free Mind—Dan Brown’s own Dutch library of rare occult books—on Facebook.

Josh Jones is a writer and musician based in Durham, NC. Follow him at

The Bibliotheca Philosophica Hermetica, or Ritman Library, was founded my Joost R. Ritman in Amsterdam.

and therefore unites many underground streams which feed the roots of our Craft.

Many a writer, like Brown, has found inspiration among the Ritman's more accessible works (though, sadly, Borges, who was blind in 1984 and died two years later, could not have appreciated it). Now, thanks to the Da Vinci Code author’s magnanimity, a new generation of scholars will be able to virtually access, for example, the first English translation of the works of 17-century German mystic Jakob Böhme, which librarian and director Esther Ritman describes as “travelling in an entire new world.”

In an introductory essay, the Ritman notes that academic interest in occult and hermetic writing has increased lately among scholars like W.J. Hanegraaff, who tells “the ‘neglected’ story of how the intellectual community since the Renaissance has tried to come to terms with ‘esoteric’ and ‘occult’ currents present in Western culture.” That those currents are as much a part of the culture as the scientific or industrial revolutions need not be in doubt. The Hermetically Open project opens up that history with “an invitation to anyone wishing to consult or study sources belonging to the field of Christian-Hermetic Gnosis for personal, academic or other purposes.” Look for the digitization project to hit the web in the coming months.