The Abacuá no legitimate groups of which operate outside of Cuba, although the Ekpe Societies from which the Abacuá or Ñañigo evolved still exist in Africa, are often referred to as the Afro-Cuban masonic order of the Caribali, originating in the fraternal Leopard Societies of the Calibar Coast of West Africa. Although they are actually their own order, not owing their origins in any way to European Freemasonry, as the tradition developed and grew in Post-independence Cuba, many Abacuá are also today Freemasons, as are members of several of the Afro-Cuban religious traditions. 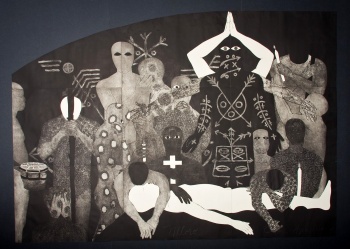 A Tribute to the Abacuá Society. Guardians of the Afro-Cuban community.

"Man is one who reflects the sheer human dignity in labor, brotherhood, cheer, rebellion against injustice, who maintains the moral code established by the ancestoral Abacuá founders, he is one who is a good father, a good son, a good brother and a good friend "

In Cuba, the slaves captured from the Cross River region of what is today the eastern provinces of Nigeria, were generally known as Calabari, whatever their ethnicity, which was usually Efik or Efor. This was simply because Calabar was where the the ships they were brought over on departed from in Africa. This later was modified by Cubans to Carabali. Carabali slaves as well as free blacks worked on the wharfs, and Carabali cabildos or mutual aid societies were first founded in Havana as early as c. 1750. These cabildos or societies recognized the political power that Ekpe provided in opposing Spanish oppression, and these groups eventually admitted their creole children born in Cuba. The first Abacuá lodge was created in 1836 for both Carabali and creole initiates. Abacuá was successful because it protected and worked to liberate all Africans in Cuba. The creation of the original lodge and the ensuing formation of others is documented in many Abacuá chants.

After the first lodge's success, a number of other lodges were established. They were most frequently identified with urban neighborhoods in Havana and Matanzas. These lodges each became "a social club of prestige for men; an informal school for historians, musicians and dancers; a vehicle for organising labor; as well as a place to hold funerals" according to Ivor Miller. Abacuá also performed a function in the organization of carnival groups that represented barrio identity. It further provided a code of moral conduct crucial to its own maintenance as an institution.

In spite of initial objections by some Africans, a lodge of white and creole men was founded in the 1850s. Acceptance of whites into the organization had a significant impact; "the rejection of racial hierarchies by the Abakuá became an important psychological tool for combating racism, for the spread of Abacuá itself and for the larger society. In particular, one Abacuá leader, Andres Petit, who also founded a Congo religion called Quimbisa, was instrumental in breaking down cultural barriers and establishing rules and rites that are still practiced. Before long, lodges included members of African, European, and Asian descent, making Abacuá "a foundational institution on the island, in the sense that [it] reflected the racial and ethnic makeup of the society half a century before the nation-state was inaugurated."