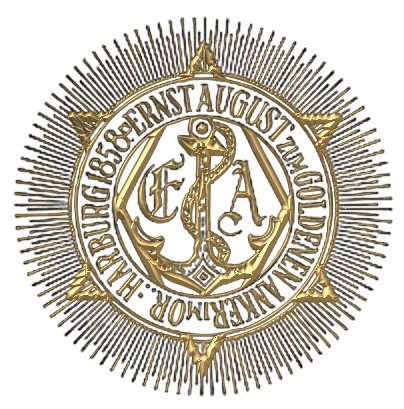 (Ernst August to the golden ancre)

In 1737 became the first regular constituted German Masonic lodge in Hamburg (Absalom). The neighbours in Harburg this new appearance could remain not concealed. After Harburger brothers visited Hamburg lodges, originated the wish to found a lodge also in Harburg.Br. Christian Gustav Korlan, owner of a golden strip factory in Harburg, called by an advertisement in the "Harburger news" all Freemasons resident in Harburg for a meeting fixed on 17th of April, 1857.To this meeting which took place in the apartment of the brother Korlan appeared 25 bretheren. Later meetings, always under chairmanship of the Br. Korlan, took place by the restaurants "Stadt Lüneburg" and "Grosser Garten" in Harburg and led thanks to big working zeal to the endowment of the new lodge. 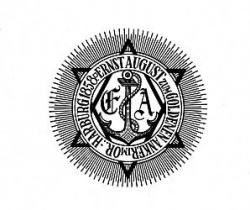 On the 14th of April, 1858 (this was also the birthday of the queen Marie von Hannover) this became as a daughter's lodge of the "great lodge of Hannover" with the name "Ernst August the golden anchor" under big condolence of many brothers from Hamburg, Hannover, Luneburg and Stade under the chairmanship of the first Dept. Grand Master's Laurenth Krüger. The name Ernst August was chosen to honour of the crown prince at that time of the kingdom Hannover, while the golden anchor on the active navigation which animated the town and gave to the Harburger citizens "golden honour".

The bijoux was invented by Br. Johann Heinrich Ernst Fricke, a master builder.

As a lodgepub decided is the still existing pub "Zum goldenen Engel" in Schlossstrasse to Harburg. The equipment was acquired by the closed lodge in Stade "Zum goldenen Christoph" for approx. 300 Mark.After one had made so all preparations for the establishment of the new lodge, was only left to catch up the approval with the great lodge in Hannover.She became on the request of the Brr. Master Chr. Gustav Korlan, Ludwig Friedrich Beste, Hartwig, Johann Gustav Scharlemann, Hermann Ernst, Johann Jochen Adolf Schönfeldt, Johann Minners, Wilhelm Heinrich Bilton, Carl Ernst Friedrich Scheibel, Louis Carl Adolf Witting, Ernst August of Jeinsen at the 2nd of March, 1858 given, the constitutional patent was executed on the 29th of March, 1858.

In the short time up to the Johannisfest five admission lodges as a result of which the membership on 29 as well as 2 serving brothers grew took place. 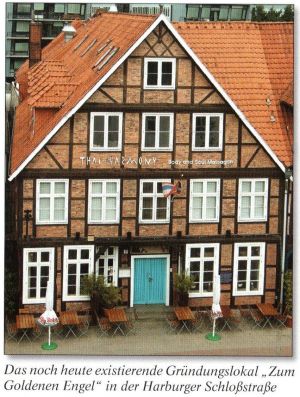 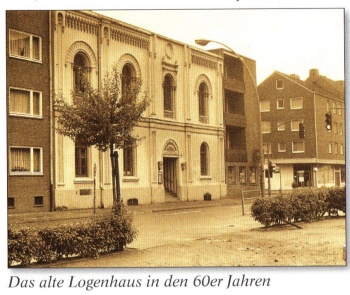 At the end of the next fremasons year (1859) the member's list already counted 42 members and 6 permanent visiting brothers and 2 serving brothers. For this amazing big connection of the brothers of our lodge "Ernst August zum goldenen Anker" spoke the fact that already in February 1861 club evenings were furnished. The first hammer guidance stood under the sign of big growth.

In 24th of February 1859 after 10 months of the existence of the lodge, the proposal already appeared for the construction of own lodgehaouse. It was again laid "ad acta". Just 5 years later, on the 3rd of March, 1864, became from Br. Scharlemann in view of the steady increase of the membership and the increasing claims of the brothers an application put: either to rent now another house, or to check by a commission whether the construction of own house is workable.
This commission reported in favour of a new building, presented on the 28th of April, 1864 a plan and on the same day the construction was decided. On the 22nd of September, 1864 was already topping-out ceremony and in the subsequent year, on the 20th of May, 1865, the first master consultation was already held at the new home. The inauguration took place in the coming Johannistag. The building cost amounted including property and inventory to 9400 talers, ide were covered partly by drawing of shares, partly by admission of a loan from the local Kämmereikasse. Financial worries were not missing. First the yearly subscription reduced in the end of 1863 by from five to 4 talers from Johannis had to be raised in 1866 on 8 talers!

In spite of this fact the charity sense of the brother masons has not suffered from it.

For this purpose among the brothers to organised collections have proved such a stately sum that of it 835 children could be given.

On the 18th of March, 1868 the closing of the "great lodge of Hannover" had occurred. A reason here for were at the past the political circumstances in Germany. Our box "Ernst August to the golden anchor" changed, after skilful negotiations on the 8th of June, 1868 to the "big lodge of Prussia", called great box "Royal York to the friendship". A connection with the great lodge "Royal York" was the right choice concerning the religious question and ritual question.

The great box "royal York to the friendship" was also ready immediately, was also left to us furthermore our old ritual, even if the so-called Christian principle was dropped in the new great box officially only 1872-with in by virtue of step of a new basic-sedate - was dropped.The lodge recognised even then that one would be able to pursue the humanitarianism principle defended by her best of all in the great lodge "Royal York to the friendship". The Affiliationspatent was issued on the 8th of June, 1868 and the Affilitation was carried out on the 5th of November, 1868 by the master of the chair, brother Fricke.

On the 8th of February, 1872 the first funereal lodge took place.

It was dedicated to the memory by 14 late brothers.

Since this time till this day the funereal lodge are carried out in the working calendar regularly in our box "Ernst August to the golden anchor".

The widows and orphans cash founded in 1874 received at the instigation of the Br. Matthaei her statutes. The store formed by occasional collection and donations of groschen.

On the 28th of December, 1876 a sister's party was celebrated for the first time. This party met big approval and a lot of words, so that this celebration is carried out still today regularly.

In January, 1883 became after a burial of a brother who had lived in easy and modest relations, the foundation of a Sterbekasse (You grave will be paid from it) considered. Br. Karl Gravenhorst made in 18. of the same month a suitable application for the purpose of elaboration of the Statutuen, in 28. Spetember in 1883 the approval of the great lodge found.

On the 7th of April, 1892 "Innere Orient" (the high-level degree) which consisted particularly of brothers of our lodge and the lodge "Roland" in Hamburg was donated. Later access from the lodge "Selene zu den drei Türmen" in Luneburg, "Zum helleuchtenden Stern" in Celle and "Globus" in Hamburg.

The sisters of the lodge "Ernst August zum goldenen Anker" caught the plan and founded in 1905 a sister's help to the support for destitute sister whom there is still today.

On suggestion of the Br. Otto Brenecke became in the winter half-year in 1906/07 and 1908 the equipment created, to poor school children a warm milk breakfast, consisting of 1/3 litres of milk and 2 bread rolls to hand over. This beneficent enterprise has met with big approval, so that also non- masonic associations joined to this event spontaneously.

The sister's help supported the care of wounded soldiers of the 1st world war. They met to coffee boards and talks, purchases of dear gifts to the soldiers in the field, manufacture of clothing and for the realisation of child supply.

The membership of the lodge "Ernst August to the golden anchor" had grown in 1920 on would you believe 150 brothers.

After the assumption of power by the National Socialists the lodge life was suppressed in the whole of Germany, so also with us, brutally.

On the 3rd of February, 1934 our lodge was closed by selfresolution and preempted with it of a compulsive resolution. (In 1935 all German lodges) The house with property was conveyed to the property Templar's order and the whole inventory was confiscated. The last chair master, Br. Otto Benecke, some questioning had to go by the Gestapo and several house search. A small part of another about 90 brothers at the moment of the resolution still met regularly to a "family table" in a bar, had to put but still on arrangement of the Gestapo also these meetings.

After the breakdown of the "third empire" 1945. Brothers with the intention already met to obtain the approval for the reopening of the box. Inputs were directed to the Hambuer senate which kept itself, however, for not responsible and gave to the box the advice to turn in this thing to the British military government. The lodge under the direction of Br. Friedrich Mayr reported in this sense her concern to the British commander in writing and found big obligingness with him.

Then after completion of various questionnaires the permission to the reopening of the lodge was given in the beginning of 1946.
Thus the box was able to do on the 14th of April, 1946 the ceremonious Lightcomming with 20 brothers festively commit.
Br. Heinrich Sukohl was decided unanimously to the master of the chair electively and also immediately to join bundesgroßloge to attain as soon as possible also again in the possession of our old lodge house in the Eissendorfer street 27. On the 4th of May, 1946, documents by costly formed certificate, the lodge was installed as a daughterloge of the federal big lodge of Germany "to the old duties", parish North Germany (big lodge by Hamburg), officially again.

On the 19th of June, 1949 our lodge, as well as other 174 lodges, joined the "United great lodge of Germany". This union took place in the ceremonious frame in the Frankfurt Paul's church.

In the course of the desegregation of all great lodges in Germany on the 27th of April, 1958 (1. convention of the brotherhood of the German Freemasons) became No. 377 with the patent, from the 14th of September, 1958 states, the "Ernst August to the golden anchor" as a daughterlodge of the "big lodge AFAM of Germany" to the association of her Belongs "to united great lodges of Germany". 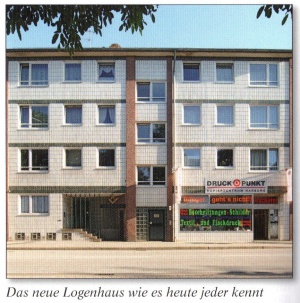 The maintenance costs of the war-damaged lodge house soon excelled our financial means, so that the demolition of the old house with next new building became more realistic. The architect and brother Adolf Prigge presents a detailed draught with exact cost plan. On this basis all doubts could be scattered to a great extent, and the new building was decided.

On the 28th of April, 1968 the light was extinguished and the lodge house was torn off after more than 100 years up to the foundations. During the construction time visited our lodge other brotherhoods and also met at the hotel of "Lindtner" in Heimfeld. The inauguration with light bringing into play in the new house could take place already on the 27th of September, 1969.

The activities of the lodge after 1946 developed according to the post-war period warily. The freemasonry had to fight in general with the demagogic effects injurious to us of the "third empire". We were not concerned by it less.

During the years following now halting, nevertheless steady rising of the memberships was to be registered and with it also an active lodge life. So that was also connected the inclusion of the sisters by common events and talks.

A narrower amicable cooperation with the lodge "Zur Erkenntnis", mutual visits of many hamburgers or of foreign lodges and an increased opening outwardly were signs of the new lodge activities.

In 1955 were again 55 brothers; currently 43 brothers stand in the chain. Our lodge house is also available to other lodges and is used by the following lodges: 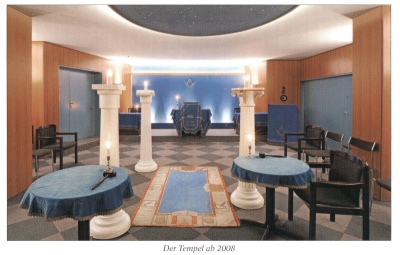 We celebrated on the 19th of April, 2008 the 150th lodge jubilee. Thanks to our Br. Uwe Hensel, anew to formed temple of the house. We lay the other course of our lodge in the hands "Master builder of all worlds" and the following generations of the lodge "Ernst August zum goldenen Anker"