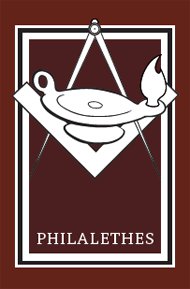 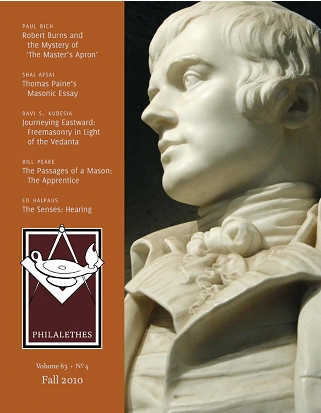 Copyright © 2010 The Philalethes Society. This PDF file may be redistributed for non-profit use, provided it is unaltered and includes this cover page and the subscription form on the concluding page. It may not be reproduced in any other manner, nor in any product offered for sale.

Today, we are more curious than ever about the meaning of the Craft. We want to understand the profound lessons of the ritual.

Philalethes is ready to be a trusted ally on that quest. Whether one is a new Mason, a seasoned Past Master, or somewhere in between, all will find much to enjoy in every quarterly issue of Philalethes!

Sign up today, or consider a gift subscription for your Lodge or a friend.

History of the Philalethes Society

Established in 1928, the Philalethes Society is devoted to the promotion of the highest quality Masonic education and research. It was created on October 1, 1928, when a small group of Masonic writers gathered at the Masonic Library at Cedar Rapids, Iowa for a very serious purpose. They were some of the most renowned Freemasons of their day: Robert I. Clegg (editor of new editions of Mackey's classics), George H. Imbrie (editor of Kansas City's Masonic Light), Cyrus Field Willard (formerly of the Boston Globe), Alfred H. Moorhouse (editor of The New England Masonic Craftsman), Henry F. Evans (editor of Denver's Square and Compass, and William C. Rapp (editor of Chicago's Masonic Chronicler).

They gave birth to the Philalethes Society because they recognized that all Freemasons are charged to spread Masonic Light, but sometimes that Light can be hard to find. Reflecting upon this problem, founding president Cyrus Field Willard said:

Those who have been members of the Fraternity for a number of years have known men who were little more than "good fellows," but because they were appointed to some minor position by a friend who was Master, they continued to go "up the line" until eventually they landed in the Master's chair. And after serving in the office for a year, they had signally failed "to set the Craft to work and give them instructions whereby they might pursue their labors." It was the realizing sense of this that prompted the formation of an association to bring together in one body the writers who felt that the great mass of Freemasons in the United States should have more information on the fundamentals of Freemasonry.

What Does Philalethes Mean?

The Greek word philalêthês (pronounced "fill-a-lay-thayss") was used by ancient writers such as Aristotle and Plutarch, and means "a lover of truth." The word came into Masonic circles through alchemical mystic Robert Samber (1682–1745), who used the pseudonym Eugenius Philalethes; Samber's use, in turn, was an homage to Thomas Vaughan, an earlier alchemist who had used the same name. Finally, a Rite of Philaléthes was founded in Paris in 1772, devoted to the study of esotericism. Founding President Cyrus Willard wrote in 1937 that the Philalethes Society took its name from the Parisian Philaléthes.

In the earliest days, the Society described itself as "An International Body of Masonic Writers." Official membership was limited to forty Fellows, who were drawn from writers and editors of the many Masonic newspapers and magazines that existed before the second world war.

Its Fellowship is limited to 40, like the French Academy, but the Correspondence Circle is unlimited in number. … Its purpose is to bring together the Masonic writers of the world who seek the Truth in Masonry.

This structure consciously imitated both the Académie Française (in the limitation of forty Fellows) and the world’s premier lodge of Masonic research, Quatuor Coronati № 2076 in London, England (in allowing non-members to participate through an unlimited "Correspondence Circle"). Members of the Correspondence Circle were also called "corresponding members."

Today, members of the Correspondence Circle are merely referred to as "Members." The number of members who are designed Fellows is still restricted to forty.

The Philalethes Society has attracted some of the greatest minds in Freemasonry. Among the original forty Fellows were

Fellows elected since that time have included Masonic notables such as

Origins of the Journal

In the Society's early days, all of its publications appeared in other, established Masonic periodicals—many of which were edited by Fellows of the Society. There was no seperate Philalethes journal. Many of the Society's earliest publications were issued under the slogan, "With Rough Ashlar and Tracing Board," and under the motto, "There is No Religion Higher than Truth." Both of these maxims reflect the viewpoint that Freemasonry is a serious and deeply personal quest for Truth and Light.

Unfortunately, the Great Depression took a toll on many of the Masonic periodicals, and after that the hardships of World War Two caused nearly all of them to fold. It was only after the war ended that the Philalethes Society was able to release the first issue of Philalethes. The first issue, dated March, 1946, was edited by Walter A. Quincke fps.

Philalethes: The Review of Masonic Research and Letters has long served as the de facto magazine for North American Freemasonry.

It was the intention of the founders that the Philalethes Socety would effectively serve the needs of those in search of deeper insight into the history, rituals and symbolism of Freemasonry.

Today, our mission is much the same as when we began nearly a century ago. A new generation of Freemasons is in search of Masonic Light. Not satisfied with simplistic answers, they ask for new ideas, more information, deeper engagement, expanded fraternal contact, and a more profound exploration of the meaning of the Craft. The members of the Philalethes Society are united in that quest for knowledge.