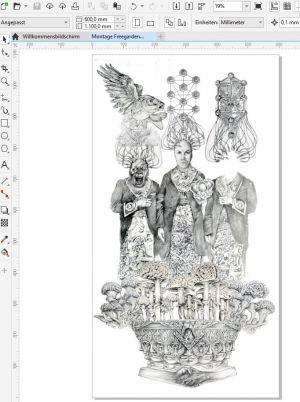 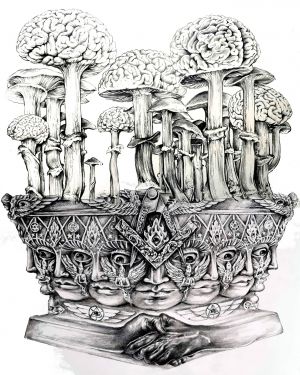 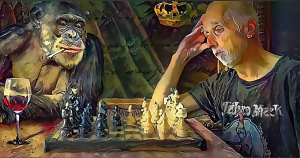 Jethro: Brother Jens - we know you as compiler of the Freemasonry Wiki and creator of bizarre images, as book author and activist in the battle against cancer. The United Grand Lodges of Germany honored your life’s work with the Grand Medal of Accomplishment and the President of the Federal Republic of Germany awarded you the Federal Cross of Merit. You are now over 70 years old and are beginning a new mammoth project. We want to discuss that here. But let’s begin with a fundamental question: What is the source of your creative energy?

Jens: There is no single “source” in the usual sense. My creative process is tedious and obsessed with detail. Painting for months on the same canvas stimulates a continuous flow of new ideas. A painter doesn’t cease to think while painting.

Jethro: So you inspire yourself indirectly via a detour through your own painting?

Jens: This is typical for most surrealists. In addition a sort of panic grips me because I don’t know if enough time remains for me to finish such projects.

Jethro: So do you view your recessive cancer as a Sword of Damocles?

Jens: Much more positively! I view the cancer as my coach and pacemaker.

Jethro: In the course of 11 years you spent thousands of hours composing articles for the largest European online encyclopedia of Freemasonry, the so-called “Freimaurer-Wiki. Wouldn‘t it have been more logical to have published the material in book form?

Jens: Lord no! Other Masonic brethren can do that much better than I. For that we have our excellent “Research Lodges” like “Quatuor Coronati”.

Jethro: The new book on which you and several co-authors are working, is called the “Magic Carpet Lodge”. Will that be some sort of autopsy performed on three hundred years of Masonic history from artists’ point of view?

Jens: As far as the bizarre aspects of our enigmatic Masonic chain of pearls are concerned, we regard ourselves, so to say, as truffle hogs. I like “autopsy” as well, because we of course dissect selectively.

Jethro: You have constructed your website as a sort of virtual drawing board in order to provide co-authors with a framework for their constructions. What prerequisites did you have to develop for this unusual sort of collaboration?

Jens: This is our common “sandbox” - a type of mutual organic inspiration which hopefully will succeed in weaving a red thread through the individual episodes.

Jethro: Tempt us a bit with some keywords. What themes do you have on this drawing board?

Jens: If you go back to the beginnings when Freemasonry was just beginning to be socially tolerated , you’ll be entering the sphere of alchemy, that quite acceptable sort of intellectual sorcery in which our masonic “Rough Stone” had to compete with the proverbial “Philosopher‘s Stone”. For example, at the court of the North German Brother Carl of Hessen absurd figures like the Count of St. Germain were revered in noble circles. Back then side branches of the Illuminati were taken seriously, and Brother Isaac Newton was denoted as “The Last Magician”. It was a time of intellectual mishmash which had to deal with characters pulling rabbits out of hats and claiming Freemasonry to be a vehicle for magical insights. Jethro: Will such exceptional situations just be described - or how do you intend to do it?

Jens: Absolutely not, und just for this reason I must via my fictitious Hamburg “Magic Carpet Lodge” invent brand new means to enable visiting these and many other curious Freemasons.

Jethro: On your drawing board I have seen that this very special “Magic Carpet Lodge” has features for time travel to enable such fictitious visits.

Jens: Our little time travel machines were developed by the brethren of this lodge together with Brother Isaac Newton. One can visualize these instruments as foldable devices like flip phones, formed in the endless loop of a Möbius strip.

Jethro: The Master of your Lodge is called Timothy Lear, and his Deputy Master is Manley O. Hall. So you’re placing demands on your readers’ willingness to use their imaginations?

Jens: Oh, the demands aren’t really that high. Anyone who could enjoy Terry Pratchett’s “Discworld” or Douglas Adams’s “The Hitchhiker’s Guide To the Galaxy” will also savor our new form of “Masonic Fiction”.

Jethro: Hallucinogens play a rôle, and a special type of vision?

Jens: Absolutely. Here we go back even further, to the age of ritual preparation of oracles and to rituals in which psychogenic substances indeed played a part. There is a good reason why the acacia is so important in many aspects of Freemasonry. Some species of acacia actually contain true psychoactive substances like the highly potent molecule dimethyltriptamine.

Jethro: You imagine that the Freegardeners fulfill the rôle of monks in the lodge’s garden, their duty being to cultivate psychotropic mushrooms. That was indeed their task in many ancient monasteries, along with the art of brewing. How appropriate: In the real world the first German Freegardener Lodge, “Theodor zum goldenen Garten”, recently accepted you as Honorary Member.

Jens: Yes, so one thing leads to another. Concerning this special way of looking at things: Do you recall the series of books “Magic Eye”? With the help of these books one could rapidly learn to see pictures in three dimensions.

Jethro: It wasn’t all that easy, didn’t one have to “squint”?

Jens: Yes - more or less. For this reason our “Magic Carpet Lodge” conducts seminars to teach novice brothers and sisters this special way of seeing. Only after they learn to see the Tracing Board in three dimensions are they ready for time travel.

Jethro: Could you reveal some of the destinations?

Jens: For example there would be a trip on a Mississippi paddle-wheeler which had been refitted as armored gunboat and whose captain had converted the cargo bay to a Masonic temple.

Jethro: Was there ever such a riverboat?

Jens: Indeed there was. On the converted Mississippi steamer “DeKalb” the entire crew consisted of Freemasons. Before every mission a temple ritual was celebrated, The two smokestacks, which were attached to the boiler in the cargo bay, were decorated with the letters B and J. The ship’s captain had the rank of Master of the Lodge. The first mate was the Senior Warden. The respective watch officers served as Tylers.

Jens: Oh, there are so many curious meeting places. And please don’t forget: We are just at the beginning of our Magical Mystery Tour. Time travel to the wigwam of the first Native-American lodge might be worth mentioning or the rôle of the kabbalistic Sefiroth for time-traveling Freegardeners. Harry Houdini, Jacob Boehme, Albert Pike, Military lodges and the Buffalo Soldiers - all enticing temporal destinations for the brethren of this lodge.

Jethro: And that brings us to your co-authors - did I see on your website that the famous English author Dr. David Harrison is contributing to the first “Masonic Fiction”?

Jens: Yes, that’s right, and further authors who have agreed to participate are Brothers Gerd Scherm, Jan Gespard, Werner J. Kraftsik, and Robert Matthees. Brother David plays an important rôle on the front cover, upon which several months’ work remain to be done. He, like me, is better known as a non-fiction author; but he is really enthusiastic to cooperate in the conception of this huge literary free space. (see appendix)

Jethro: Then this illustration is not yet the completed painting?

Jens. By no means. I need two or three months for a painting. However, to give my co-authors a preview, in the meantime I employ fast virtual computer-graphics programs

Jethro: Do you prefer any particular IT-tool?

Jens: Yes. “Dreamtime” was actually developed by Google for dream interpretation and psychoanalysis but indeed offers the virtual graphic designer many valuable tools. I can enter my personal artistic concept and styles into the program and then create quick doodles and sketches which almost hit the target, thus enabling my co-authors to see which direction the caravan is headed.

Jethro: Extensive, complex, and ambitious. Here lots of technical knowhow meets an extreme amount of Masonic fantasy. How is your timeplan?

Jens: Open end, but, as mentioned, under my own particular Sword of Damocles - recessive cancer. I imagine that my drawn and painted illustrations for this book will determine the timeline, since I’ll require the longest work phases. Otherwise we currently view our time schedule as open. I presume that further co-authors will join our team.

Jethro: I’ve long realized that you regard your “rough stone” as a malleable lump of clay. It’s good that there are creative anarchists like you in our chain of brothers who don’t want to declare every puddle a national treasure, claiming it might be a remnant of Noah’s Great Flood. I wish you and your co-authors a continuing, entertaining time trip.

Jens: Thank you, my brother.