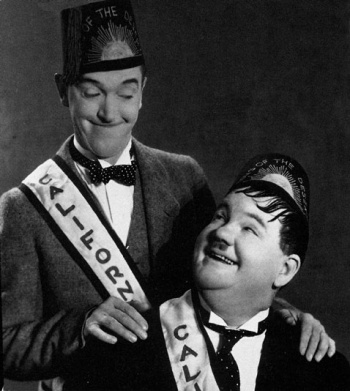 Motion picture "Sons of the desert" Oliver Hardy (right) dressed as a "Shriner", that he really was.

Hardy was initiated into Freemasonry, at Solomon Lodge No. 20 in Jacksonville, Florida. His membership is mentioned in the TV interview on an episode of This Is Your Life in 1954.

He was a member of Solomon Lodge No. 20 in Jacksonville, Fla. and was a frequent visitor at Hollywood and Mount Olive Lodges in California. Died Aug. 7, 1957.

A cabaret and vaudeville singer, Oliver Norvell "Babe" Hardy made his first movie, "Outwitting Dad", in 1914.

In 1917 he played a bit part in "Lucky Dog", starring his future comedy partner Stan Laurel, although it was not until 1927, in "Sugar Daddies" (1927), that they formed their onscreen partnership that was to last until Utopia in 1951. Hardy’s screen character was noted for his genteel pomposity, his tie twiddle, and long suffering look while dealing with Stan’s character and his well-meaning but ultimately frustrating on screen antics. Oliver Hardy’s ashes were interred in the Masonic Garden of Valhalla Memorial Park in North Hollywood.

Laurel and Hardy appeared live on a 1954 episode of This Is Your Life where Hardy's masonic membership is noted.

Oliver Hardy (born Norvell Hardy) was an American actor, most remembered for his role in one of the world's most famous double acts, Laurel and Hardy, with his friend Stan Laurel. He did not adopt the name "Oliver" until 1914. He did so as a tribute to his father, who died when Hardy was an infant. Hardy's parents were of English and Scottish descent. His father, Oliver, was a Confederate veteran wounded at the Battle of Antietam on September 17, 1862. After the war he worked as a foreman for the Georgia Southern Railroad, supervising the building of a rail line between Augusta and Madison. Their marriage took place on March 12, 1890; it was the second marriage for the widow, Emily, and the third for Oliver, who died less than a year after Norvell's birth. By the time Hardy was born, the family had moved to Harlem, Georgia. Hardy was sometimes a difficult child. He was not interested in education, although he acquired an early interest in music and theater, possibly from his mother's tenants. He ran away from home to join a theatrical group, and later ran away from a boarding school near Atlanta.

His mother recognized his talent for singing, and sent him to Atlanta to study music and voice with a prominent musician, but Hardy skipped his lessons to sing in a vaudeville house. He was sent to a military college, but ran away from there, also. After toying with college and the idea of studying law, he decided to follow his dream of a singing career. In 1910, a movie theater opened in the future Hardy's home town of Milledgeville, and he became the projectionist, ticket taker, janitor and manager. He soon became obsessed with the new motion picture industry, and became convinced that he could do a better job than the actors he saw on the screen. A friend suggested that he move to Jacksonville where some films were being made. In 1913 he did just that, where he worked as a cabaret and vaudeville singer at night, and at the Lubin Studios during the day. It was at this time that he met and married his first wife, pianist Madelyn Saloshin. The next year he made his first movie, Outwitting Dad, for the Lubin studio. He was billed as O. N. Hardy, taking his father's name as a memorial. In his personal life, he was known as "Babe" Hardy, a nickname that he was given by an Italian barber, who would apply talcum powder to Oliver's cheeks and say, "nice-a-baby". In many of his later films at Lubin he was billed as "Babe Hardy." Hardy was a big man at six feet one inch tall and weighed up to 300 pounds. His size placed limitations on the roles he could play. He was most often cast as "the heavy" or the villain. He also frequently had roles in comedy shorts, his size complementing the character.

By 1915, he had made fifty short one-reeler films at the Lubin studio. He later moved to New York and made films for the Pathé, Casino and Edison Studios. He then returned to Jacksonville and made films for the Vim and King Bee studios. He worked with Charlie Chaplin imitator Billy West during this time. In 1917, Oliver Hardy moved to Los Angeles, working freelance for several Hollywood studios. The next year, he appeared in the movie The Lucky Dog, produced by G.M. ("Broncho Billy") Anderson and starring a young British comedian named Stan Laurel. Oliver Hardy played the part of a robber, trying to stick up Stan's character. They did not work together again for several years, yet eventually formed the famous team of Laurel and Hardy. Between 1918 and 1923 Oliver Hardy made more than forty films for Vitagraph, playing the "heavy" for Larry Semon, another Charlie Chaplin imitator. In 1919, he separated from his wife, ending with a divorce in 1920, due to Babe's infidelity. The very next year, on November 24th, 1921, Babe married again, to actress Myrtle Reeves.

This marriage was also unhappy, with Myrtle eventually becoming an alcoholic. In 1924, Hardy began working at Hal Roach Studios working with the Our Gang films and Charley Chase. In 1925, he was in a film "Yes, Yes, Nanette!" starring James Finlayson, who in later years was a recurring character in the Laurel and Hardy film series. The film was directed by Stan Laurel. In 1926, a hot leg of lamb changed the future of both Laurel and Hardy. Hardy was scheduled to appear in Get 'Em Young but was unexpectedly hospitalized after being burned by a hot leg of lamb. Laurel, who had been working as a gag man and director at Roach Studios, was recruited to fill in. Laurel kept appearing in front of the camera rather than behind it, and later that year appeared in the same movie as Hardy, 45 Minutes from Hollywood, although they didn't share any scenes together.

In 1927, Laurel and Hardy began sharing screen time together in Slipping Wives, Duck Soup (no relation to the Marx Brothers film of the same name) and With Love and Hisses. Roach Studios' supervising director Leo McCarey had realized the audience reaction to the two, and had begun intentionally teaming them together, leading to the start of the Laurel and Hardy series late that year. With Laurel and Hardy, he had created one of the most famous comedy teams of all time. They began producing a huge body of short movies, including The Battle of the Century (1927) (with one of the largest pie fights ever filmed), Should Married Men Go Home? (1928), Two Tars (1928), Unaccustomed As We Are (1929, marking their transition to talking pictures) Berth Marks (1929), Blotto (1930), Brats (1930) (with Stan and Ollie portraying themselves, as well as their own sons, using oversized furniture to sets for the 'young' Laurel and Hardy), Another Fine Mess (1930), Be Big (1931), and many others. In 1929, they appeared in their first feature, in one of the revue sequences of Hollywood Revue of 1929 and the following year they appeared as the comic relief in a lavish all-color (in Technicolor) musical feature entitled: The Rogue Song. This film marked their first appearance in color. In 1931 they made their first full length movie (in which they were the actual stars), Pardon Us although they continued to make features and shorts until 1935. Perhaps their greatest achievement, however, was The Music Box (1932), which won them an Academy Award for best short film - their only such award.

In 1936, Hardy's personal life suffered a blow as he and Myrtle divorced. Whilst waiting for a contractual issue between Laurel and Hal Roach to be resolved, Hardy made Zenobia with Harry Langdon. Eventually, however, new contracts were agreed and the team was loaned out to General Services Studio to make The Flying Deuces. While on the lot, Hardy fell in love with Virginia Lucille Jones, a script girl, whom he married the next year. Laurel and Hardy also began performing for the USO, supporting the Allied troops during World War II. They also made A Chump at Oxford (1940) (which features a moment of role reversal, with Oliver becoming a temporarily concussed Stan's subordinate) and Saps at Sea (1940). Beginning in 1941, Laurel and Hardy's films began to decline in quality. They left Roach Studios and began making films for 20th Century Fox, and later MGM. Although they were financially better off, they had very little artistic control at the large studios, and hence the films lack the very qualities that had made Laurel and Hardy worldwide names.

In 1947, Laurel and Hardy went on a six week tour of Great Britain. Initially unsure of how they would be received, they were mobbed wherever they went. The tour was then lengthened to include engagements in Scandinavia, Belgium, France, as well as a Royal Command Performance for King George VI and Queen Elizabeth. In 1949, Hardy's friend, John Wayne, asked him to play a supporting role in The Fighting Kentuckian. Hardy had previously worked with Wayne and John Ford in a charity production of the play What Price Glory? while Laurel began treatment for his diabetes a few years previously. Initially hesitant, Hardy accepted the role at the insistence of his comedy partner. Frank Capra later invited Hardy to play a cameo role in Riding High with Bing Crosby in 1950.

In 1951, Laurel and Hardy made their final film. Atoll K (also known as Utopia) was a simple concept; Laurel inherits a boat, and the boys set out to sea, where they discover and claim a brand new island, rich in uranium, making them powerful and wealthy. However, it was produced by a consortium of European interests, with an international cast and crew that could not speak to each other. In addition, the script needed to be rewritten by Stan to make it fit the comedy team's style, and both suffered serious physical problems during the filming.

In 1955, the pair had contracted with Hal Roach Jr. to produce a series of TV shows based on the Mother Goose fables. However, this was never to be. Laurel suffered a stroke, which required a lengthy convalescence. Hardy had a heart attack and stroke later that year, from which he never physically recovered. During 1956, Hardy began looking after his health for the first time in his life. During his health watch, he lost more than 150 pounds in a few months. This weight loss completely changed his appearance. However, he suffered a major stroke on September 14, which left him confined to bed and unable to speak for several months. He remained at home, being cared for by his beloved Lucille. He suffered two more strokes in early August, 1957 and slipped into a coma from which he never recovered. Hardy died on August 7, 1957, aged 65 years old.

His remains are located in the Masonic Garden of Valhalla Memorial Park Cemetery in North Hollywood.