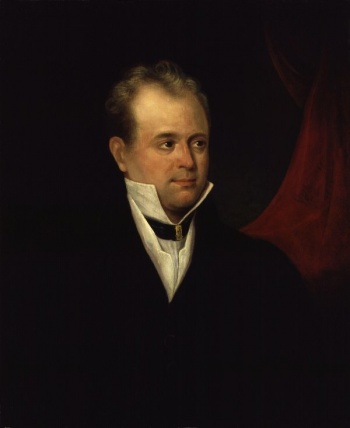 Richard Carlile was an English radical of the early nineteenth century, an advocate of free speech and a free press, and a supporter of Thomas Paine. He is more famous for his paper The Republican, and his reporting of the Peterloo Massacre of 1819. The Peterloo Massacre occurred at a reform meeting in St Peter’s Fields in Manchester on the 16th August; Carlile was due to speak at the meeting when the yeomanry attacked the crowd, killing 15 people and injuring 400-700 people. It became a defining event in radical British history.

Subsequently, Carlile was imprisoned for three years after being found guilty of blasphemy and seditious libel; he had published a story that had motivated people to hate the government and he had published the work of Thomas Paine that had criticised the Church of England. Carlile was also fined an incredible £1500, and as he could not possibly pay such a sum, he served an additional two years in prison. Despite his Fleet Street premises being raided and shut down, Carlile continued to write for the paper and his wife Jane continued printing The Republican, until she herself was imprisoned. Over 150 men and women were imprisoned for selling the paper. His sister Mary then continued publishing the paper until she herself was imprisoned. When Carlile was finally released in 1825, he continued to publish radical material and supported equal rights for women and campaigned for the end of child labour.

In Masonic terms, Carlile is better known for his Manual of Freemasonry, an exposé of Masonic rituals that included the three Craft degrees, the Royal Arch, the Mark and the Knight Templar degree. The exposé was so successful that it was reprinted many times and was used in lodges throughout the nineteenth and early twentieth centuries in England as a source for learning ritual. The ritual is in essence, a version of emulation, although there are incidences throughout of archaic words and phrasing, an example being a charge that Carlile points out ‘is occasionally delivered at the closing of the Lodge by the Master’ which begins ‘When the Lodge is closed you are at liberty to enjoy yourselves with innocent mirth…’More recently, historian Andrew Prescott remarked that Godfrey Higgins may have been an influence on Carlile’s ritual, Higgins being a Freemason who had researched the York Grand Lodge. Influences on Carlile’s rituals and Masonic writings include the early exposé Jachin and Boaz, the Masonic works of William Finch, Thomas Paine’s Origins of Freemasonry and Thomas De Quincey’s Origin of the Rosicrucians and the Free-Masons.

These rituals first appeared in The Republican in the latter part of 1825 while he was still in Dorchester Gaol, and Carlile reissued the material in a complete volume in 1831 to accompany the Masonic lectures of his partner the Rev. Robert Taylor. The rituals were reprinted in 1836, and again in 1845, when it was published with the name The Manual of Freemasonry. Carlile had been imprisoned again for printing radical work, and died in 1843. His Manual of Freemasonry represents a view of English Freemasonry from the late eighteenth and early nineteenth centuries, but the popularity of his rituals kept them in print continuously for decades, helping English Freemasons with their lodge work well into the twentieth century.