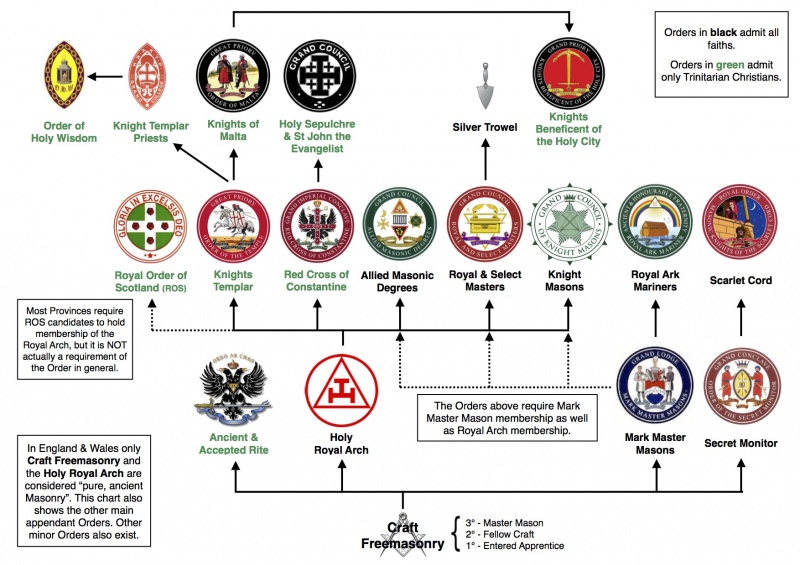 Basic structure of Masonic appendant bodies in England and Wales, illustrating the sequence in which members typically progress from the Craft to further Orders, as well as the minimum requirements for joining those Orders

The story of this degree contains events before, during and after the Biblical Flood. The apron and emblems of this degree are easily recognizable by the ark and rainbow motif, although the degree itself claims the original apron to have been made of unfinished lambskin. The historic prerequisite to be made a Royal Ark Mason is to be a Mark Master Mason, however, the degree has no connection symbolically or otherwise to the Mark degree. A brother is said to be "Elevated" to the Degree of Royal Ark Mariner.

Secret Monitor—First degree: The legend narrated during the Induction ceremony is the story of the remarkable friendship which existed between David and Jonathan. During the ceremony the candidate is instructed in a certain course of action to be adopted when a brother is about to do anything which might prove injurious to himself and it teaches a beautiful lesson in friendship and fidelity.

Prince—Second degree: The admission ceremony to an assembly of Princes is also derived from the Book of Samuel and narrates how Saul sought the life of David. It further relates an interesting legend of the methods contrived to thwart the efforts of the jealous King.

Supreme Ruler—Third degree: This last named degree is unusual in that the ceremony of Installation constitutes the third degree of the Order pertaining to the Kingship of David and is fundamentally concerned with the headship of a Conclave. Embodied in the ritual of this degree, however, is the ceremony of commissioning, which gives rank and status within the Order as a whole, a certificate being issued to that effect.

The actual date when this ritual was introduced is not known, but is believed to have been worked in England over two centuries ago. It has been generally accepted that the degree is remnants of an old operative ceremony originating from Lancashire and designed to distinguish true craftsmen from speculative masons. While the degree has little Masonic connection to the Hiramic legend, its interesting legend relates to the martyrdom of St. Lawrence who was afterwards canonized for his fidelity and Christian attributes. However, little of an authentic nature can be said regarding this. Records of the Grade anywhere are extremely rare, and no real early Minute has appeared to shed light on its origins. If this Grade was actually worked in Lancashire, which was near to Grand Lodge activity, it does seem that records would be available and something a bit more definite obtainable. The main lesson of the degree is fortitude.

The ceremony relates neither to the First or Second Temple, nor to Masonic Chivalry. It is interesting in its simplicity and has a little-heard-of legend, which is pleasing to examine and of merit. The very peculiarity of the Grade marks it different and is perhaps the ground upon which the operative origin is claimed.

This interesting Grade was formerly known under the titles of "Mason Elect of the Twenty-Seven" or "Select Mason of the 27," and is found in many different countries, although records are by no means abundant. There can be little doubt that this Grade and the Grade of "Select Master" owe their origin to a common source. In his Masonic Orations, published in 1803, Frederick Dalcho mentions that in addition to the regular degrees and among those mentioned is "Select Master of 27." Elsewhere there is mention of "Select Mason of the 27" indicating that the Grade which we now work as "Grand Tiler of Solomon" is or very close resemblance to the present-day "Select Master."

Early evidence of the Grade is contained in History of the Cryptic Rite, where is reproduced a diploma issued by Moses Cohn to Abraham Jacobs, dated November 9th, 1790, which in addition to some of the regular Grades of the Rite of Perfection, mentions the "Select Mason of Twenty-Seven." There are also other references to such a Grade at an early date.

This Degree is an authentic ‘side degree’, where it was customary for one brother to confer it on another and while it is known to have been working in the United States in 1831, its actual origin is unknown. The ritual attempts to connect the legendary Constantine with the Masonic fraternity and teaches a fine lesson in universal equality and humility; it also incorporates a suggestion of operative influence in an extensive lecture that also imbues the lesson of justice.

The Grade of Architect is the first of a trilogy of Grades expanding upon the Solomonic lessons of architecture. The structure of the degree is Continental in character, resembling certain Rites of the French and German grades, but incorporating the use of trestleboards as used in English and Scottish Masonry. Not surprisingly, it is first found attached to the Early Grand Rite of Scotland under the same name, as the VII° of the Blue Series. It is noteworthy in its interpretations as "extensions" or elaboration of the Master Mason degree. For this reason, it is assumed, it is not practiced or sanctioned by the English Masonic bodies, appearing only in the American and French variants of the Allied Masonic Degrees. The Grade was attached to the Grand Council of the AMD of the United States as an Active Grade in 1934.

The Grade of Grand Architect is a continuation sequence of the Architect Grade. It is found first in the Early Grand Rite of Scotland under the same name, as the VIII° of the Blue Series. It is a continuation of the Solomonic legends of architecture, which seek to impose the ideal of an increasingly select and secretive body of craftsmen performing work upon the Solomonic Temple. It is now only practiced in the American and French Grand Councils of the Allied Masonic Degrees. The Grade was attached as an Active Grade to the Grand Council of the Allied Masonic Degrees of the United States in 1934.

The Grade of Superintendent is somewhat of an enigma. It is clearly related to the Grades of Architect and Grand Architect, indeed, it is the climax of the latter, but was not one of the Grades of the Early Grand Rite of Scotland. Research into that body has failed to establish any connection, the IX° of that Rite’s Blue Series was worked as "Master of the Blue," and pertained to one of the tests of wisdom between King Solomon and the Queen of Sheba. Neither is it found under the Rite’s Red, Black, Green, or White Series; where it would be most inappropriate in any case. Thus we are left with the frustrating mystery of a Grade which appears to be a ne plus ultra in the Solomonic architecture. Whatever the case may be, it is a fitting tribute to the other Grades, and rightly deserves a place in the Allied Masonic Degrees.

The Grade of Master of Tyre is a modern one, originating in North Carolina, USA, and is no doubt the product of the fertile minds of the Masonic brethren in the western area of that state; they being the originators of the Allied Masonic Degrees themselves. It does not appear in any of the early rituals of that body, and was later incorporated into the working along with the Grades of Superintendent, Architect, and Grand Architect.

The Grade of Excellent Master, or Excellent Mason as it was known in its earlier working, is of such age as to confuse us in estimating just how old it is. It is almost safe to state that it is as old as is Royal Arch Masonry, because it has always formed a part thereof. Even in the United States it is mentioned as early as 1769, when in St. Andrew’s Chapter, Boston, a Brother was "made by receiving the four steps, that of an Excellt., Sup.-Excellt., Royll. Arch and Kt. Templar."